Yes...it has been a while since I've posted "Music Monday" but since I'm still thinking about this past weekend I'll share one of the highlights of the trip...Husband and wife team--Derek Trucks & Susan Tedeschi--The Tedeschi Trucks Band!!!!!

If I said the word "Sewerfest" -- what would come to mind? The first time my friend told me about this I was like "what--are you kidding me?" That was 3 years ago, this year we made the journey....and OH MY GOODNESS!!!
.....and how many have heard of Merlefest? Hillside Album Hour?

Okay...let me start with Sewerfest.  My childhood friend's husband's family used to own the land that the Wilkesboro Water Treatment plant is on right now, but for the past 20 years or so it's been transformed into a 4 day campground for the Merlefest "festivarians" (heard that this weekend and thought it was a fun term to use). I know your first question would be about smell...I promise you there is NO odor whatsoever...well, except for the various foods cooking in camp.

Similar to the campground at the Galax Fiddlers Convention, there is music throughout camp...

Getting to the Merlefest site was easy as pie...they run shuttles from Sewerfest ALL day long and into the night.  Saturday morning we took the first bus to the festival and began staking out our spots...a tip passed on to me from my friend...this is our spot at the Doc & Merle Watson Stage were we wanted to see several bands but the big finale Saturday night was The Tedeschi Trucks Band!!!
BTW....there are 12 stages on the Wilkes Community College Campus--trying to see all those is impossible in one day!


In the meantime we saw many great bands there--

This is Assembly of Dust -- they were AWESOME!!!

This is the spot we staked out on The Hillside....for the Hillside Album Hour performed by The Waybacks.
OH MY GOODNESS....where do I even begin.  Well, being that this was our first experience (note I keep using that word) let me give you a bit of background here.  The Waybacks have played there for several years but in the past 4 years (I think) they perform a particular "album"--hence the "album hour"--they keep it a secret...leaving the audience in great suspense and speculation as to what they are going to do.  In years past they've done Led Zepplin, The Beetles and last year they did The Allman Bros "Eat A Peach" which I will add is FANTASTIC (yeah, I had to buy it there) YOU HAVE TO HEAR IT TO BELIEVE IT....they invite many Special Guests to come on stage with them to help out.

So, this year there was a Facebook Guessing Contest as to what the Album Hour was going to be, the band gives clues and leaves readers to guess.  I read many, many guesses from The Eagles to the Grateful Dead to Fleetwood Mac....no one really knew.  They come out on stage--set up---and begin tuning and teasing the audience.

(this pic is towards the end of the show but you can at least see ALL the band and Special Guests--Sam Bush, Jim Lauderdale Susan Tedeschi, Sarah Dugas and John Cowan)

OH...back to the teasing the audience...

Yes, they played the entire "Are You Experienced" album...and the Hillside Album Hour becomes 2 hours!!!

I was so excited when Susan Tedeschi came out to sing with the other guests...

I didn't take my camera to the night concert but Hubby got some pics of the Tedeschi Trucks Band....they were FANTASTIC!!! Derek Trucks a phenom on the slide guitar!!!

There is so much to keep going on about but I think you get the picture...I'm still on Cloud Nine...and Yes, as for Sewerfest/Merlefest.....I AM EXPERIENCED!!!

We are already making out plans for next year--and we are doing the entire 4 days next time!!!!

How do you celebrate?  I celebrate all year long....recycling, composting, planting and picking up litter when I see it...yes, if I don't have a bag I'll put it in the back of my truck and carry it home.  I even have been known while on a run to STOP and pick up trash laying just feet away from a trashcan!!!!  THAT is one of the things I don't understand about people...if you can carry it with you why the "H" can't you take it back with you?  I'm reminded of the commercial from the 70's that showed the Indian chief with the tear in his eye over all the litter...

Thanks to Jess I've won an award!

Definition:   Liebster is a German word meaning favorite, dearest or beloved. The Liebster Blog Award is awarded by bloggers to other bloggers who have fewer than 200 followers, to help spread the word about their blogs and to help them gain wider recognition. ﻿

So, here's the rules for the Liebster blog award:

1. Link back to the person who awarded it to you.  That would be Ms Bubbleknits herself, Jess!

2. Post the award to your blog...(steal the button from above)

3. Give the award to 5 bloggers with less than 200 followers.
1-Robin @ For The Love Of Fiber -- One AWESOME lady!
2-Dani @ Knit, Stitch, Click -- she's a knitter, weaver, quilter & seamstress
3-Kim @ A Place Called Serendipity -- my FAVORITE cousin is an amazing artist
4-Kimberly@ The Wheel & Distaff -- my friend for many years.

...and last but not least...my wonderful Hubby and his AMAZING talents!
5-Jack @ Appalachian Flutes & Dulcimers


4. Leave a comment on their blogs to let them know that they've been offered this award.

5. List 5 random facts that people don't know about you.

1-I'm a "motorhead" from way back...grew up at a dragstrip and love hotrod cars!
2-I have recently (since Sept) become a swimmer, working with a coach to get good enough to compete.
3-I'll try anything....EXCEPT for jumping out of a completely good airplane/bridge/rock (you get the picture).
4-I'm not a hoarder but a serious pack-rat.  I do occasionally watch "Hoarders" and afterwards go throw stuff away!
5-(this is really hard...I can't think of much I haven't told you over the years) I have discovered that I'm a yarn/coffee/wine/tequila snob!

Today I spent a good portion of the day at the 2nd annual Olde Liberty Fiber Faire...and, of course, had a GREAT time.

Seeing old friends and ooooogling over massive amounts of fiber and yarn!

Before you ask...yes I did fall off the "yarn diet" wagon again--BUT....it's for the new Grandbaby you see!!

Since we still don't know the sex of the baby yet I thought this would make a GREAT unisex baby blanket!  Don't you?﻿ 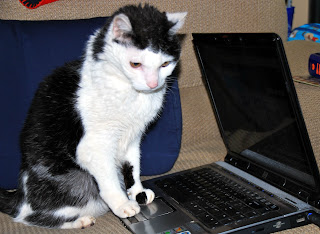 Yep....he's still up to his old antics!  I set down my laptop to let the dogs outside and come back to find THIS~~

Maybe he just wanted to let everyone know he's still alive and kicking?!  I'll have to check my temp files to see what sites he was surfing!

Check it out...Birdsong is having a contest HERE.  Go on over and enter and tell her you saw it here!

OH MY.....you know how when you start eating spaghetti it tends to grow?  You eat and eat and the bowl/plate never seems to empty....

Well, that's what spinning this merino feels like!  This started as a 3 1/2 lb fleece I bought...the processing was so labor intensive that I sent it off to Ohio Valley Natural Fiber for processing. When this "beehive" arrived--I just love it.
The fleece had a lot of trash in it and so there is still small bits that I have to pick out as I spin it...not too bad but just enough to slow the spinning process.

I decided to pull off portions to at least make it feel as though I'm "getting somewhere" with the massive amount I have ahead of me.
Just a mind game I have to play but it really didn't work too well, cause I knew that I had more to spin.

Yes, I am spinning it as gossamer...that doesn't help matters much huh?

I filled 2 bobbins and decided to go ahead and ply them...

From my calculations I have 600+ yds of 2ply yarn in this skein.  It tells me that it wants to be a shawl...maybe dyed!  But what color???

Now I just have to spin something else for a change of pace.  Oh...the decisions I have to make from the stash....wool, silk, alpaca??!!

This weekend the Olde Liberty Fiber Faire is taking place this Saturday (4/14/2012).  I'm going to take my wheel and knitting for some quality time with my fiber friends.  Anybody else gonna go?

As always I prefer to make my gifts and with two new "granddaughters" and a VERY special niece I needed to find something to make for Easter that they would appreciate.

I made my niece, Maggie, one of the bunnies some years ago and she's treasured it - so I had to make her the Sheepie!

Now, I can't wait till Sunday when I can give them to their new "people"!!

Yesterday's post lead me to find this news story... 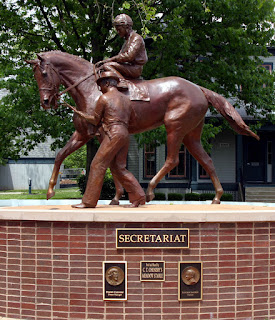 This morning I watched one of my FAVORITE movies (yeah, I have a lot of them) but with the Kentucky Derby just on the horizon this one was appropriate. I have yet to watch it that I don't have tears streaming down my face.
Secretariat was a Virginia horse...a long shot that only a handful of people had faith in but accomplished a feat that NO HORSE has been able to do in 34 years! Will we have a Triple Crown Winner this year?

Back in 2008 Hubby and I visited the Kentucky Horse Park...yeah, I had to see this statue!

Check out this video and relive this horse's amazing race.

This year I'm giving serious thought to having a Kentucky Derby Party...with hats and all...to watch the Derby, just seems like a lot of fun.  Besides it's Son #2's birthday--his last one in the 20's!  Has anyone else ever attended or thrown a Derby party?  Tips and pointers are welcome!!


So....did anyone else play the lottery Friday?  I've NEVER bought one...till Friday.  As difficult has times have been lately I figured what the heck...I can let go of $1 for a VERY slim chance.  There were 5 winning tickets matching all 6 numbers--and 1 ticket that matched 5 numbers to the tune of $250,000.  It was sold right here in the valley....guess who bought that ticket!?

I NEVER win anything so I'm sure you really believed that one!

I'll have some FO's to post up in a few days...made bunnies & sheep for the kids in the family waiting for them to dry so I can stuff them.
Also working on some spinning....