"We plant seeds that will flower as results in our lives, so best to remove the weeds of anger, avarice, envy and doubt..." ~Dorothy Day 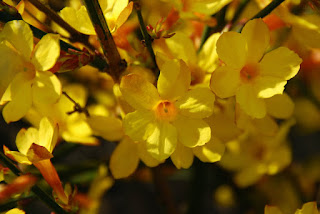 a bit late blooming this year (should have started blooming late Jan) but I have to say it's MAGNIFICENT!! 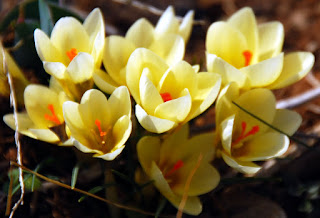 Since I've been working 2 jobs--during this training period I'm working a total of 60 hours a week at the moment--I've had very little time for much of anything...especially knitting. But since Sunday was the Daytona 500 I started and finished a project while watching. 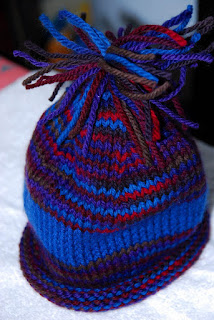 I think you'll remember the last FO I posted, the umbilical cord hat, for the gal at the coffee shop who's having a baby boy in a few weeks...well, I should have known to knit up 2 of those hats. Big Brother to be wanted so badly to try that hat on...so I knitted him his very own--in the exact colors he requested, which I happened to have in my "leftover" basket. He was so excited.

Besides the usual on the needles, Celtic Vest (which I haven't picked up at all) and 2 pairs of socks, I have cast on yet another baby sweater (Rudy's groomer is expecting in May) all the while still keeping up my "stash busting"--oh, I have seen so many new yarn colorways I WANT...I just need more hours in a day to get through my stash---so I can buy more!

"A cloudy day is no match for a sunny disposition." ~William Arthur Ward 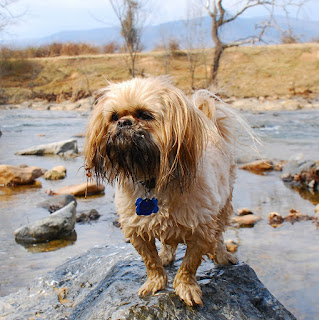 Guess who doesn't care that it's still winter?! We went for a walk in the park on Monday morning and "someone" decided he wanted to swim!

"Those who wish to sing, always find a song." ~ Swedish Proverb

I love me some Brad Paisley!! Enjoy~~


Keep on Knittin' & Spinnin'----and hoping for Spring (warmer weather) to arrive soon!
Posted by Robin at 6:28 AM 2 comments:

"You must start with a positive attitude or you will surely end without one." ~Carrie Latet 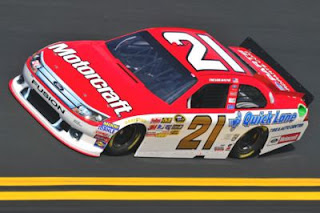 Well....though Jr didn't win, I have to say it's nice to see some old faces and a new face in Victory Lane. The race was a bit boring...I'm not sure I'm a fan of this new "racing style" but that's just my opinion. I did get a good nap in!

Congratulations to Trevor Bayne driving for Virginia's very own...Woods Bros. to his FIRST win in 2 starts in the Winston Cup (I will forever have issues with that) Sprint Cup series.
This young man only met David Pearson YESTERDAY--the last man to win Daytona for the Woods Bros in 1976.
Shoot....he can't even enjoy the champagne being sprayed in Victory Lane!! But what a birthday present!!

Today's activities consisted of a 5 mile run; some laundry; some sewing and some knitting....oh yeah--and the nap!

"Toughness is in the soul and spirit, not in muscles." ~Alex Karras 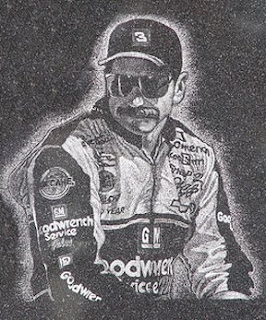 One of the saddest and tragic days in sports...(warning--if you are not a NASCAR fan move to the next blog) and the day that NASCAR racing changed forever.

Dale Earnhardt died 10 years ago today. I know it sounds weird but he felt like family...he was one of my heroes. Now...if you know who this is--you either hated him or you loved him.
My family has been involved in racing since I was a kid, first drag racing then circle track racing. From 1985-1996 we had a team (my father was crew chief/owner, my brother drove and me? ...well, I took care of the body work, lettering and tires on the car as well as wore a hat called "GoFer"--go for this and go for that)a couple of other fellas helped us. We raced at our local NASCAR sanctioned track...there I met MANY of the drivers. Like Bobby Labonte, Terry Labonte, Jeff Gordon, Kerry-Kelly & Dale Earnhardt Jr and Dale Earnhardt himself.
In 1992 we were involved in a race at Martinsville while the "big guys" were there. I was on cloud 9...let the name dropping begin! I met Richard & Kyle Petty, Ken Schrader, Ernie Irvin, Davey Allison, Alan Kulwicki, Rusty Wallace, Harry Gant (he invited me into his hauler), Mark Martin (I'm taller than him) and Earnhardt himself---got to go into the lounge area of the hauler...Richard Childress, "Chocolate" Myers and Kirk Shelmerdine all chatted with me. It felt AWESOME walking around the pits...but it really surprised me that several of the drivers including Ernie Irvin & Ken Shrader came to our car and asked US questions!! I have lots of pictures...only I haven't scanned them. OH--I have lots of autographs too...obviously! It is a weekend of memories I will cherish FOREVER!!
Sometimes I miss those racing days but then again...I love having my nights and weekends to do what I want to do! It's a demanding sport, I really don't know how these guys do it. I know all that we had to go through on the small circuit...WHEW!! 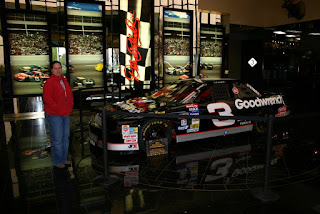 "Sometimes life's Hell. But hey! Whatever gets the marshmallows toasty." ~J. Andrew Helt

It's going to be a Manic Monday... 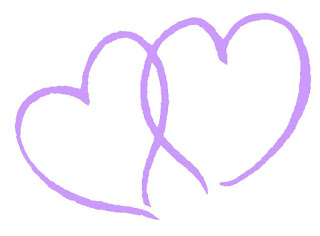 "Wherever you go, no matter what the weather, always bring your own sunshine." ~ Anthony J. D'Angelo, The College Blue Book

This is a wonderful surprise...a patron at the library commented on one of my handmade sweaters the other day, saying she wished she could knit. I told her if she wanted to learn I'd bring her a pair of needles...which I did. To my surprise, she brought me this! She makes them...isn't it cool? She remembered me saying one day that if I won the lottery I'd buy a tropical island...she had NO clue I had a "beach room"--this is the coolest nightlite for that room.

"Turn your face to the sun and the shadows fall behind you." ~Maori Proverb 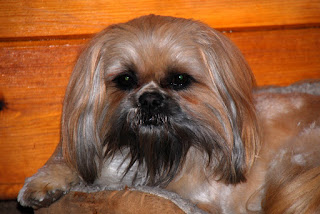 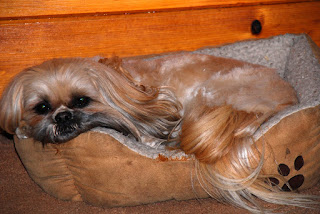 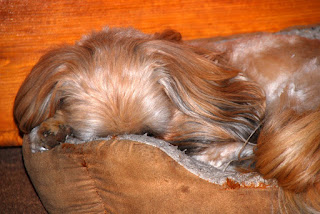 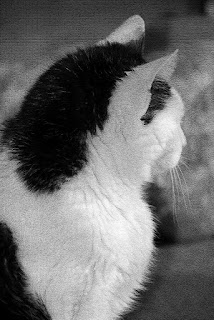 Anybody else tired of winter? --besides me?? 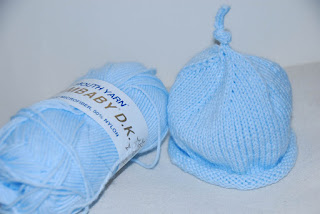 ...and the baby knitting continues! From the stash of course--this is a fun pattern to knit. VERY quick, can you say "instant gratification"?


You remember this post Well...my hairdresser LOVED THEM! She's going to send me pictures of the "baby girl" wearing them, of course we have a little bit more to wait before she arrives.

I have been sewing too...I couldn't post this till the gift had been "gifted"--but as you've probably read my favorite cousin had a birthday this week. I have had these items stashed away for quite some time now so the idea came to me to make these-- 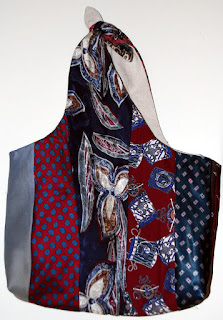 Can you tell what it's made from? 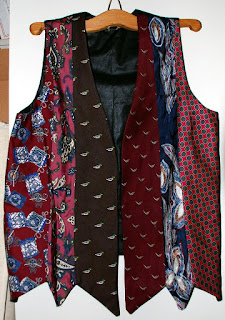 I know it may seem "garish" but these ties belonged to her father (my uncle that just passed away last month)and our grandfather. There's just more sentimental value to these than anything else.
I had intended (and still do) to make myself a "tie vest" but I thought it be more fitting to make Kim one first.

Are you ready for the Super Bowl?? My menu is set...started cooking today...it's all about the food, commercials and OF COURSE----FOOTBALL!!!!

新年快乐 and Dogs on Thursday

"Thousands of candles can be lit from a single candle, and the life of the candle will not be shortened. Happiness never decreases by being shared." ~ Buddha

....translated simply as Happy New Year!
This is the year of the Rabbit, Rudy and my Chinese zodiac symbol. I have a favorite Chinese restaurant (25+ years....) that we won't get to tonight to celebrate but maybe over the weekend. I personally, know the owners well...I should the entire time I was pregnant with Chase I CRAVED one of their dishes, ate it at least once a week.
They've had the same placemats as always...the ones with the Chinese zodiac on it. 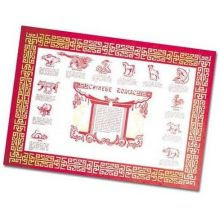 So, what does it say about me?

Occupying the 4th position in the Chinese Zodiac, the Rabbit symbolizes such character traits as creativity, compassion, and sensitivity. Rabbits are friendly, outgoing and prefer the company of others. They also prefer to avoid conflict. In confrontational situations, Rabbits approach calmly and with consideration for the other party. Rabbits believe strongly in friends and family and lacking such bonds can lead to emotional issues.
(FYI-the last sentence rings SO true, part of the reason why things have been so bad for me lately)

Will you celebrate the year of the Rabbit? 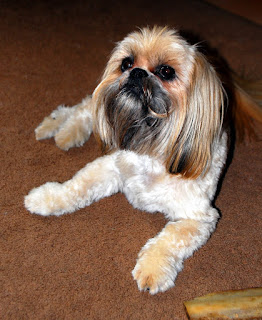 Rudy got a haircut yesterday! Mr Handsome!! ...looks like I'll be knitting more out of my baby yarn stash--his groomer is expecting, a baby girl!! 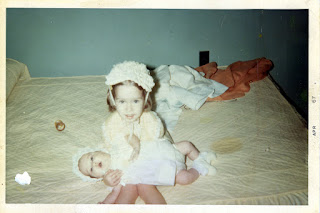 HAPPY BIRTHDAY TO MY FAVORITE COUSIN...KIM!!

You are the best!! 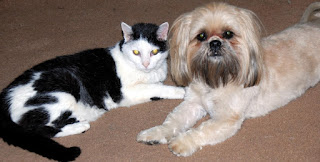 "Why not learn to enjoy the little things - there are so many of them." ~Author Unknown

Here's a RARE photo...they were both heads down before I picked up the camera. Ole Ace was too slow to get up before I took the shot. They snuggle often, it's just too hard to get the picture! Ace loves his canine brother...he really does, but if you ask him....
Posted by Robin at 2:11 PM 2 comments: 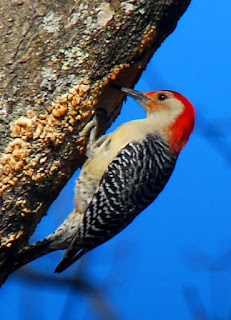 "Keep a green tree in your heart and perhaps a singing bird will come." ~Chinese Proverb

We have a new residence being set up in our backyard...noticed them Saturday morning.
It's a pair, but you can't tell male from female but they do take turns working on the nest. 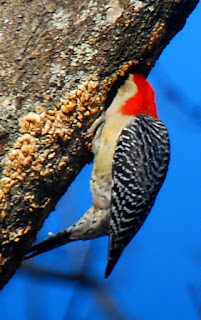 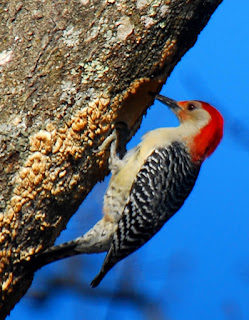 ...they keep a close eye on me! I hope they do move in...it'll be fun watching the babies grow up.