Milo does miss his Grandma...he had his daddy send me this picture of his new haircut! 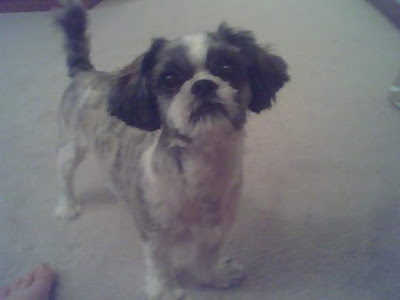 Personally I love being able to see his eyes, I swear he talks to you through them!

Hope everyone is having a relaxing "Labor Day" weekend! I am!! 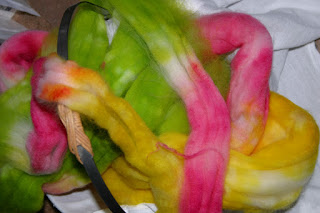 Some time back I ordered this from ScoutJ in her "Prepster" colorway. Superwash Merino...4oz's worth that's been staring at me for some time. Every time I go into the fiber room it was always looking at me...

I tell ya...this is fun to spin! I can't wait to ply it...and of course I will be navajo plying it to keep the colors together as much as possible. It still needs to speak to me about what it wants to become, maybe once it's plyed?!

Here are the singles so far... 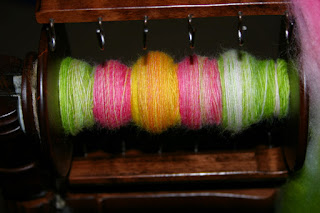 I'm so far behind on my blogging, things have happened and such that I needed to post...bear with me I'll get it all done.

I participated in the HHHH (Hush-Hush Handspun Hootenanny) Swap and received this GREAT package from Cary, I believe this will be the next fiber to spin! 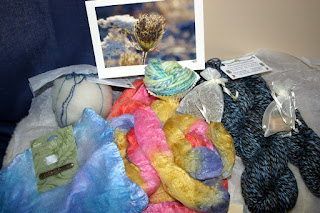 She included a fiber sample from her corridale sheep, silk hankies, wool & soysilk roving --AWESOME colors!, sheeps milk soap she made from her flock…even a “fat free” cupcake (see the center of the photo) that fit right in Weight Watchers! A beautiful victorian looking needle case and a lavender sachet from her garden. Her handspun is gorgeous, it’s wool/alpaca/cashgora blend that I can’t wait to knit up...gee, what should I make? I'm thinking mittens?!
THANKS again Cary!! I love making new fiber friends!! 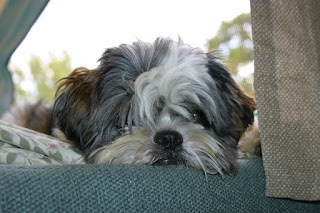 Do you think this is the face of someone who misses his Grandma? He needs a haircut...
He came to spend the weekend with us, we had the camper up getting it ready for camping, I think he wants to go camping too!!

I know I'm not as serious with my posts for this each week as many other participants are...that's because Ace is so much darn fun to photograph and poke-fun at!
This is another "repeat" photo, hubby accidentally deleted the pictures I had taken of Ace last week. So, in looking through my old folder I found this one.
If you've been reading for a while you know that Ace has his favorite pillow that he "loves"...A LOT, so much so that earlier this summer he actually threw his back out "loving it"! ...yes, we all know he's weird! Many know my weird little fella's story and others don't, I put a link on the sidebar to a previous post.
(shhhh...the grouchy old man has a birthday coming up soon!)

This is not a great shot, I had to grab the camera pretty quick...because we came in to find he'd been "steppin' out" on his pillow! Yes, it's blackmail material for later...yep, that's Lammie Ewejean in bed with him!

Since I finished spinning my merino/silk fiber I'm having a serious problem finding something to spin. I'm committed to spinning 10 minutes a day! 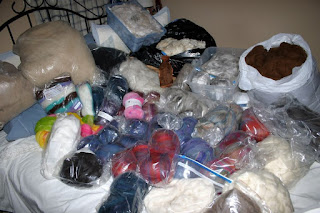 ...this is one of those embarrassing moments, where I admit I need a 12 step program...Hello, my name is Robin and I have a fiber problem...I've run out of storage space in my fiber room!
(Hey, DD...I need your room, then I can buy more!)

...turned into FO's thanks to Ravelympics...I have finally crossed the Podium!

My main event had issues, I entered my Nicole vest in the VestVault category. On opening night I found that my project was no where to be found in the event forum on Ravelry as I had "registered", so I chalked it up to a disqualification for "Yarn Doping", on appeal and with a Presidential pardon I was reinstated...all the while the knitting continued. The finish line was in sight when I took a good look only to find an obvious knitting error...which caused a major "frogging incident". With great sorrow I withdrew this project from the event and started on my alternate event...WIP Wrestling. Where I was able to finish 2 of my WIPs! 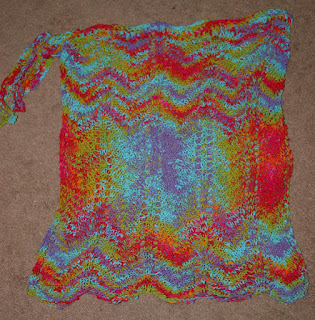 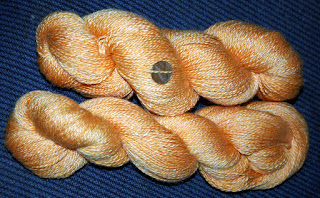 Quick post since my internet connection has been "iffy" today!

I know I've posted this picture in the past but I think it deserves another posting... 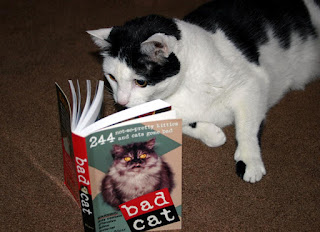 You know you're in trouble when the cat starts reading books like this!! The scary thing is...he's SO into it!!

I just had to use that since we all know how much I hate Mondays! 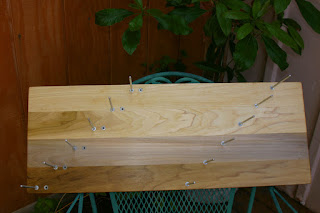 My fantastic Hubby made me a warping board.

So this weekend I gave it a try! 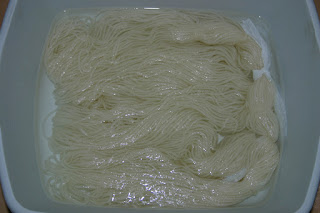 I wound the yarn on the warping board, tied and and put it in to soak. 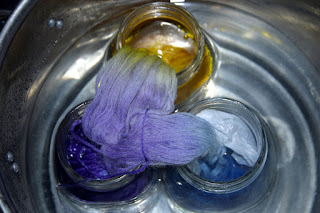 My color choices came from my Granny's garden, she loved pansies. They were everywhere in her many flower beds.

Here are the jars of color steeping...keeping my fingers crossed. 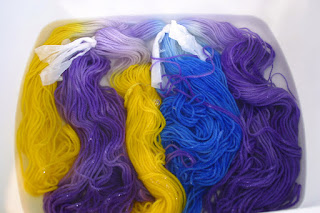 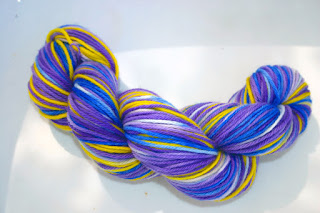 But you know something, now that I look at it...I think it came out looking more like her bearded iris'!!
This is an experiment, the last test to my success will be in the knitting...I hope it doesn't pool too much!

Most already know I grew up such a tom-boy that the idea of seeing me doing "domestic work" is probably pretty amazing, if you had known me back then. I've learned these "crafts" over the years out of necessity. 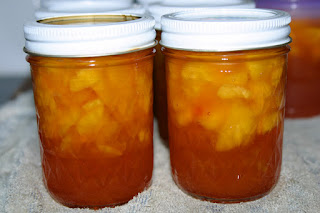 My Granny started me out very young...and my Mom did her part by sending me to "sewing lessons" when I was 11. When times were lean I sewed for the kids and myself to make sure we all had something new to wear on occasions. My grandparents always had a huge garden so we didn't have to worry about missing out on the summer harvest...until now. They've been gone for several years now, so I buy my produce at our local farmers market. With grocery prices going up I'm using this past knowledge to "squirrel-up" for the winter. I've frozen peaches, blueberries & corn. Made jams & "experimental" bread & butter pickles. 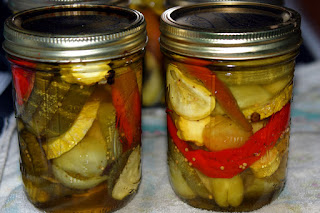 Experimental because I expanded on something my Granny used to do with her yellow squash & zucchini. I'll let you know how they turn out! I have orders placed with my "favorite farm" for some green beans to can. Who knows what else might strike my fancy in the coming weeks!

Don't get me wrong, I love doing this...I just hate cleaning up after myself!

I have also been busy with my Ravelympics project -- Nicole 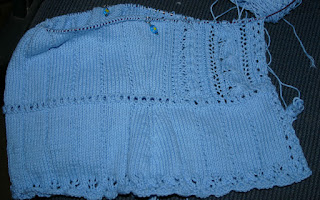 Not sure that I'll be crossing the finish line though, 6 days and counting...I would really like to wear it at the beach in a few weeks!

After 2 weeks of sweet, lovable and precious Milo, all Mr Ace has to say is...


Talk To The Paw! 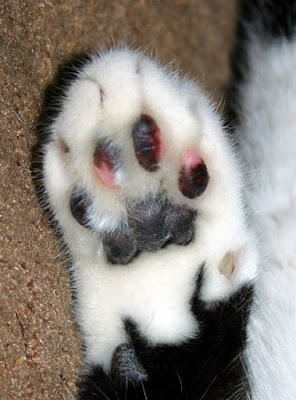 I have several friends going through some hard times, please know you are in my constant thoughts and prayers.

God must have know there would be times we'd need a word of cheer,
Someone to praise a triumph or brush away a tear.
He must have known we'd need to share the joy of "little things"
In order to appreciate the happiness life brings.
I think He knew our troubled hearts would sometimes throb with pain,
At trials and misfortunes, or goals we can't attain.
He knew we'd need the comfort of an understanding heart
To give us strength and courage to make a fresh, new start.
He knew we'd need companionship, unselfish....lasting....true,
And so God answered the heart's great need with Cherished Friends....like you!!


Just moments ago I received a phone call that Little Mason Joseph didn't make it. He fought for life for 2 1/2 weeks...now there's a new angel in Heaven. 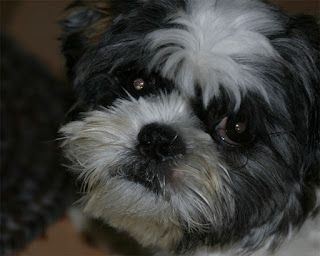 After 2 weeks with us Mr Milo left late this afternoon to live in his new home with his Daddy...

Yes, tears have been shed and I'm missing him so much. (the cat's happy...almost sneering)

I love this little face...

First I'd like to Thank everyone for the birthday wishes...I had a very good birthday! The icing on the cake came today.

I ran my very first 5K this morning! I must admit I was nervous at the beginning and the adrenaline started early, I was so afraid that I was going to start out too fast so I positioned myself in the rear. That way I would feel good as I passed runners and not be in the way of the stampede. 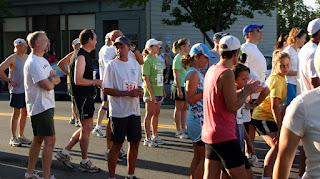 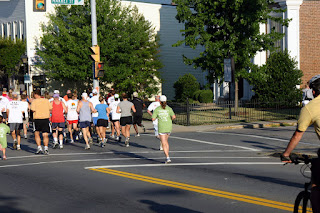 As you can see only the Bike police are behind me. 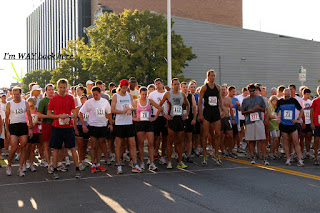 This is the start line...see the fella to the right of center, in black, jumping? He was the men's overall winner of the 10K. He came by me so fast on the last leg with so much speed I felt a pull from his draft!! 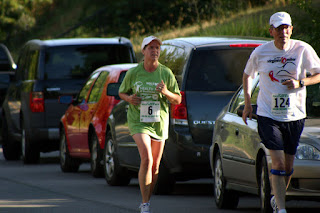 Which helped me make my pass. Little did the guy in front of me know but he kept me going...he had a shirt on that indicated he'd done this before. So I decided to keep up with him and make my pass later. 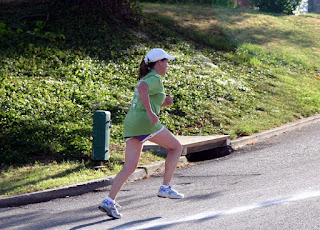 Living in this valley means there are mountains and hills everywhere, the finish line was at the crest of a hill going into the park...so I sprinted...UPHILL!!

Upon arriving at the finishing line I found a surprise cheering section! Some of the gals from our Knit/Spin group came to cheer me on...HOW COOL IS THAT? Pam, Nikki, Stephanie, Dani & TJ...You guys are fan-tab-u-lous! 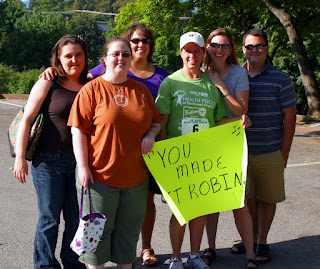 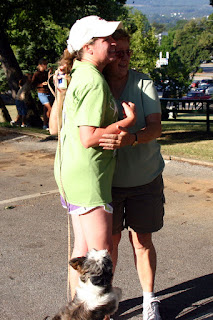 My Mom & Milo were there...and obviously Hubby was there--he's behind the camera!

There was a slight advantage for me today having turned a year older. It put me in a "new age bracket" in my 5K race. I finished--running not walking as I originally expected! 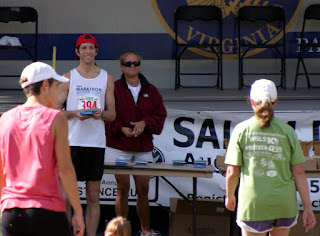 Michael Wardian was handing out the medals, you've got to read more about this guy. He just finished a 100 miler in June...in 2007 he ran back to back marathons. I mean BACK TO BACK days...finished first on the first day and 3rd on the second day! Recorded the fastest time in a marathon pushing his son in a stroller!!! 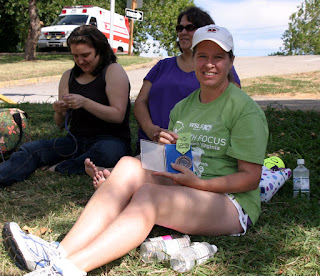 I didn't have my knitting there but you can count on my cheerleaders to have theirs!! 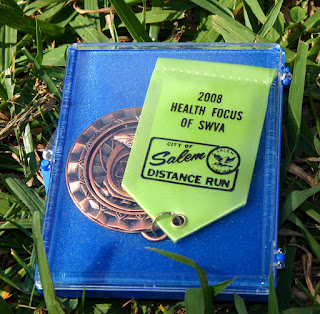 I finished 3rd in my age bracket!! Granted I have no idea if there were any more than 3 in this age bracket but HEY...for my first race I can think that there were!!

After the race I felt good enough to keep going. Will this be my last race...I don't think so. There's another coming up in October and November...let the training begin!

I guess I'd better go get busy with my Ravelympics project, more on that later.

Sorry...No Whiskers on Wednesday for me this week. My laptop is in the shop with all my pics--hopefully they're still there!

I found an old picture from a very old post on this very blog...that pretty much sums up how things are going at "The Coop"---
This is entitled "Kitty's Christmas Wish" 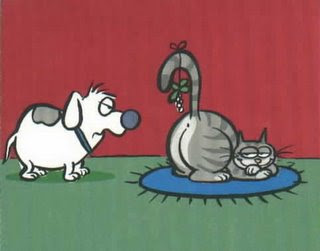 Change the cat's color to a tuxedo cat and make the dog REALLY cute...it's Milo & Ace!!