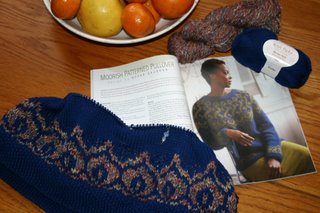 As promised here's my latest project...MY sweater I started on our Florida trip (notice the oranges)! I'm using Knit Picks Merino and my very own handspun. It's very exciting to see something I've spun going into a sweater, of course, this is not going to be the last time...I have others planned out and in the works! And as always the picture never does the piece justice.

Our trip was filled with being on the “go-go-go.” From the time we left the driveway on Wednesday (3/15) afternoon at 3:45 until we pulled the truck back in the driveway at 5:30 on Tuesday (3/22) we were non-stop in fact we logged 1999.2 miles! Now that I’ve had a chance to catch my breath and rest up a little I can finally give “blogland” an update! My MIL had our days planned for us each day (no tan for me), BUT I was able to get my plan to hit a knitting shop in! On Thursday we spent the day on Sanibel Island and while there I visited their little knitting shop called “Geez Leweez” they had a lot more in the way of needlepoint canvases, some were very tempting! I haven’t worked any needlepoint in about 20 years. Their yarns focused mostly on felting wools like Galway and novelty yarns. I did find some purse handles and bought some yarn (of course) for a purse! MIL didn’t seem to impressed by the shop…in my opinion, the Island is still recovering from Hurricane Charley and though they may not have had a large selection of what I was looking for I bought something to do my small part in helping out the community…sounds good huh…makes my excuses for adding to the stash sound like community service! 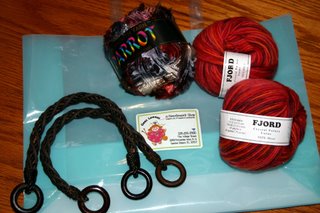 I didn't try to get to the one in Fort Myers because traffic and the driving down there were HORRIBLE. While on Sanibel we went to the Ding Darling Wildlife Preserve where we got some pretty good pictures, then drove on up to Captiva (one of the hard hit areas of the Island) many of the houses are either not there anymore or are in the process of being rebuilt! On the drive down we saw a “FEMA community” along the side of I77 near Punta Gorda…and people are still living there after 2 years! On Sunday we went to Babcock Ranch and took a swamp buggy ride through the swamp—a dry swamp! We had no idea that we were there during the “dry season” so the swamp was not a swamp! But of course, I still encountered the mosquitos and lost a pint of blood! My husband says he doesn’t wear bug repellent anymore…he just stands beside ME! On the ranch they had 2 panthers (cougars, pumas, mountain lions—all depends on what part of the US you are from)…UP CLOSE! Then our nice tour guide brought a small (3 ft) alligator on board with us…at this point my daughter ended up in my lap! Needless to say she wouldn’t touch it! 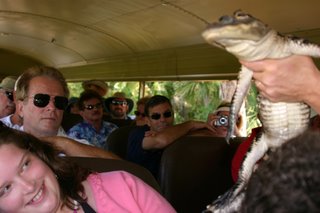 The highlight of my trip was not planned—on Tuesday my Mom had called to give us a weather update…we were in Mooresville, NC so we decided to stop for a stretch and to eat…(for those who don’t know this about me I’m a huge sports fan including NASCAR—my family and I spent 9 years in the sport—and my favorite driver was Dale Earnhardt Sr. and now Dale Jr.) So we find the NC Motorsports Museum and several of the Team shops—I found a map that located DEI (Dale Earnhardt Inc.) so…we took the side trip to DEI! One word—MAGNIFICENT! I was fortunate enough back in the early 90’s to meet Mr. Earnhardt on several occasions—I just wish he were still with us! When I got home I wanted to check something on their website only to find out that even though we spent almost 3 hrs there we still missed an opportunity—American Idol star Bo Bice and his band arrived shortly after we left to tour the facility! DARN IT! 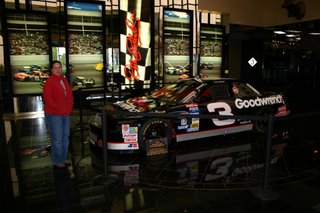 ON KNITTING: I was successful in getting a lot of knitting done—I finished the back of the “Durrow” that I’m making for my son for Christmas (that’s off to a good start maybe I can get it done by December).
I finished 1 Kitty Pi bed.
Worked a little on a sock.
And…I started a sweater for me that I will update the pictures on later!
Oh…I finished 1 book and got about 1/3 of the way on another!

With 14 hours of driving time you can get a lot done but boy does your butt get
tired!!!! 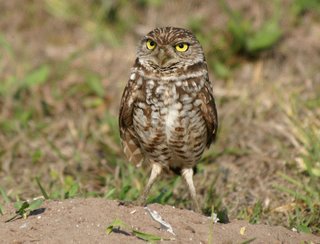 Now...this is the cuttest little critter! I call him "Sarge". He's called a Burrowing Owl. They are indangered species in Florida and out west in New Mexico and Arizona. They either take over other burrows left by other animals or the burrow their own...and he stands guard over the nest. You can get within 3 feet of them before they warn you "you're getting too close" usually they perch on one leg but we happened to get him standing at attention!
Posted by Robin at 8:14 PM No comments: 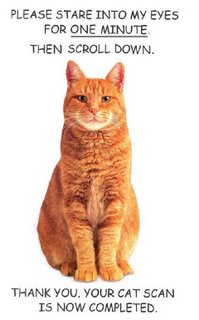 Well...I'm getting ready to leave for Florida so I probably won't be updating until I return next week. I have all my knitting ready to go, seeing as how we are driving I will have plenty of time (14 hrs ONE WAY) for possibly compeleting a project or 2...or 3! I also have my list of yarn shops to visit while on the trip! I don't make pee stops...I brake for yarn shops! Hey...now there's an idea for a bumper sticker!

I found this little kitty on another blog and thought I would test my friends! If you are knitting....you're ALL ok!

The two things I'm going to miss for the next 6 days is my spinning wheel and my kitty cat! 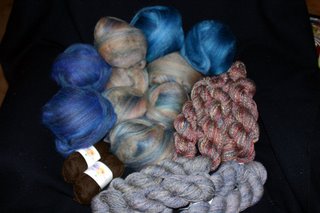 Okay...so you want to see what I bought? The pictures truly don't do the "fluff" justice! The 2 skeins of brown (sorry they are hard to see) are alpaca purchased from a very nice young lady who attended the event for the first time (moving clockwise), all of the roving is 75% Merino 25% Silk (and all available at Simpson & Co.)--the darker blue is called Stardust, the peachy/sage is called Silk Road and the turquoise is called Dolphin Dance. Not all these can be seen on David's website but he is in his studio by appointment or you can phone him if you have more questions. I just wish I could have spent more $$! His colorways are so unique and beautiful it's very hard to choose. The skeins in the lower right hand corner is what I completed while at Hawks Nest with fiber I purchased from Simpson & Co. last year.
Posted by Robin at 4:05 PM No comments:

Attending Hawks Nest was FANTASTIC! Anyone who lives close enough or can plan their vacation around it should do so! This Spinners Retreat happens twice a year, March and September. This year’s fall event happens September 28-October 1...so mark your calendars! I met many new friends and a few old friends. People came and went, a few of us stayed for the entire 4 days, there were those who came for the day and others who stayed only for one night. The lady who I give credit to for teaching me how to use my wheel was there, by surprise! I had no idea she was planning to attend! What a reunion! Spinners of all skill levels were there; I was even given the opportunity to use a “Journey Wheel” and loved it! Everything one needs is right there but, there are places to go and things to see! My hubby Jack went with me. He spent his time touring about “The Midland Trail” (Rt. 60) and taking pictures. We were able to get out on a hike a take some pictures together. I did get a lot of spinning done, got a lot of tips and ideas AND spent $$!

Here’s the man himself…Mr David Simpson of Simpson & Co. who brought lots of goodies to tempt us with…and tempt us he did. I don’t think anyone left there without making a purchase! 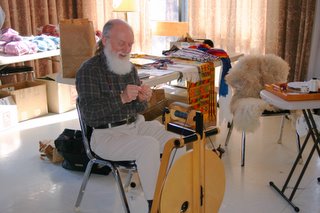 Here are a couple of shots from different vantage points of the conference room. Friday morning was particularly beautiful looking out the window over the Gorge…it snowed! 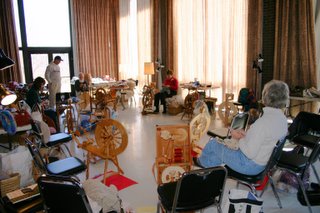 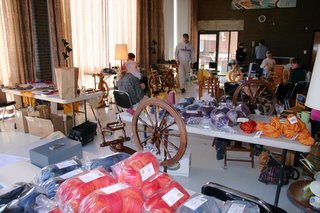